One sunny winter’s day, I travelled to Stellenbosch to give a guest lecture on China-Africa political relations to a class attending the university’s Winter School. Rather than listing a series of historical events that have influenced China-Africa relations, I planned to take an anthropological approach: to start the lecture with my own on-the-ground experiences and observations as a Chinese living in South Africa.

The Summer School programme coordinator, a friendly lady Seo, picked me up from the parking lot and told me about the student composition – eight Chinese, two Americans and two South Africans – while we walked to the classroom. “The Chinese students in our programme are very sensitive. You probably want to be careful about what you say. You know what I mean, right?”

Seo explained that the Chinese students had been very upset by a discussion in a previous lecture about the potentially negative effects that Chinese investments can have on Africa.

“Don’t worry,” I said to Seo, “I will make sure that everyone knows I’m a Beijinger, so they don’t get offended when we discuss sensitive topics.” Although Chinese people tend to take any and all criticism of China and the Chinese government from foreigners personally, it is not usually a problem when the very same criticism comes from their Chinese peers. This was one of those moments when I was grateful to be able to take shelter in my Chinese identity.

There is no way to escape controversial issues when it comes to China-Africa politics. That day, one of my challenges was to discuss the Tibet sovereignty issue and its place in China-Africa relations.

I shared my on-the-ground observation of the recent protest at Stellenbosch University against Lobsang Sangay, Prime Minister of the Tibetan government in exile. The organized protest was perceived by South African media as an example of China’s hegemony in Africa.

Sangay was invited by the university’s law faculty to give a guest lecture. The Chinese embassy (which denies that Tibet was ever more than a province of China, and therefore cannot have its own government) was furious, and mobilised Chinese students and members of the business community to quash the event. Chinese student associations and business organizations received an urgent request through a series of WeChat messages to “overcome any difficulty and send at least five people to the site to protest”. Coaches were provided to transport protesters from Cape Town city centre to the lecture hall.

To show South African workers’ supposed solidarity with the Chinese government’s position, one Chinese businessman took his team of 20 factory workers, all of them South Africans, to the university. They were instructed to hold signs and shout out slogans attacking Sangay. Some of the workers misunderstood the signs saying “One China” and kept shouting “China Number One!” The protesters finally occupied the lecture hall, and the university was forced to cancel the event. 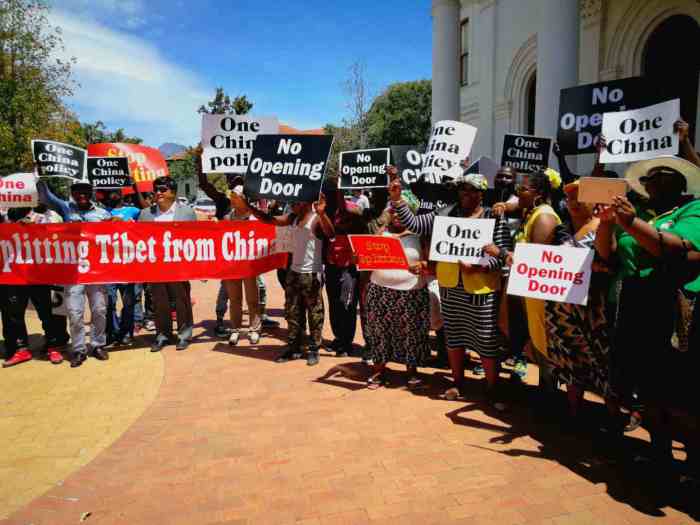 “But what is the Tibet issue all about?” one local student asked at the end of my story.

“Sorry to have assumed that you would all know about it. Of course many of you are distant from the region and are unfamiliar with this issue,” I apologized. “Can someone in the classroom please explain?”

A Chinese student volunteered to answer. “Tibet is OUR land. But some separatists want to take the land away from us. That’s the story.”

I continued to explain, requesting that they didn’t shoot the messenger. “The other version of the story is that, although it had limited international recognition, Tibet was an independent state until the Chinese army took control of the region in the 1950s. Many historians viewed it as an invasion.”

I was trying to make the point that China and Africa’s political relations are inextricably connected to many historical issues, and that these connections pose challenges for their relationship today. Luckily, nobody threw anything at me during the lecture, but the Chinese students did scowl when they realized I wasn’t going to reach a politically correct conclusion at the end of the discussion. The tension continued as we touched on other controversial issues.

Chinese who study or travel abroad often experience feeling “offended” or “hurt”. Last year, several professors in Australia were reportedly pressured by their Chinese students to make public apologies for joking about Chinese officials in a quiz, mentioning Taiwan as an independent country in course materials, and lecturing with an outdated map where certain sensitive areas in Tibet were mapped into Indian territory. “You should consider our feelings,” they said. One Chinese student openly protested to a professor who took Taiwan’s independence as a geopolitical fact. The student asked the professor to accept the Chinese government’s stance that Taiwan is a province of China as the only truth.

Chinese people’s hurt feelings are relatively well-known, to the extent that there is a question on the online forum Quora asking “Do Chinese people feel offended more often than others?” The top rated response was provided by a Chinese living in Shanghai, who simply said “This discussion should not exist.” It seems that some people are offended by this very question.

When I asked a friend who was teaching Chinese in Cape Town, Zi, about her experiences, she said: “I don’t know why I feel offended when people raise criticisms about Chinese policies on Tibet, Taiwan, and family planning… I just can’t control myself and feel like I’m being insulted personally.”

Because of the Chinese government’s extensive propaganda work and various forms of censorship, Chinese people are very used to looking at social issues from a single perspective. Strong censorship also leads to self-censorship, directing people to shut down their own thinking system and switch to the “official” vocabulary when sensitive topics come up.

In the Mainland’s compulsory history curriculum, modern China with its so-called “century of humiliation” was presented to students as a victim of wars and colonization, a weak country bullied by the west. In recent decades, Chinese prosperity and the government’s carefully engineered promotion of it has led people to form a kind of twisted patriotism mixed with pride and angry emotions.

The Chinese government also actively reaches out to Chinese communities from around the globe, and constantly uses propaganda to refresh their Chinese identities. The protest at Stellenbosch University is an example of such an act. By stressing conflicts with “the other” and encouraging them to take action, overseas Chinese’s patriotism is reinforced.

“It’s great that we’ve had these discussions,” Seo said after the lecture. “Feeling confused is the knocking on the door to free-thinking. That’s why these students need to be here.”

Zi experienced a similar process. After spending a year in Cape Town and meeting people from various backgrounds who shared ideas from completely different perspectives, she felt much more relaxed with different opinions.

“When I hear people asking me questions that make me feel uncomfortable, I try to listen and understand their perspectives. The uncomfortable feeling is still there, but now I am at ease with it.”

Tian Chen is a PhD candidate in Anthropology at The University of Cape Town researching into the cultural identity construction of the Chinese diaspora. As a student/teacher/researcher/traveller/B&B host, Tian has been studying and working in Beijing, China; Kowloon, Hong Kong; Belfast, UK; Delaware, USA; Dublin, Ireland; Adelaide, Australia; and of course his new hometown, Cape Town, South Africa. View all posts by Tian